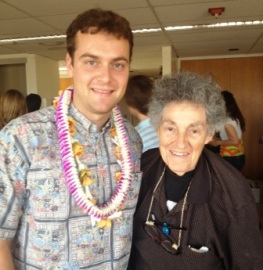 Fisher, who is pursuing a Ph.D. in geography at UH Manoa, received $1,000 from the Ann Dunham Soetoro Endowment, a collaborative effort of the university and EWC to support students who “represent Ann Dunham’s values and interests in nurturing understanding, engaging in community service, and promoting empathy to encourage global cooperation.”

“I very much look up to her as somebody that was deeply committed to Indonesia and admire her for her approach in conducting research, as well as her pragmatism in working with communities,” Fisher said of Dunham and her work. “These are all areas I hope to strive for in my studies and my work.”

ThinkTech Hawaii also features a variety of other video segments hosted by Sharp and focusing on Asia-Pacific issues.

The EWCA would like to welcome its two newest chapters and their chapter leaders:

We look forward to hearing all about their future activities. If you reside in one of these areas and would like to be involved in chapter activities, please email the chapter leader of that area.