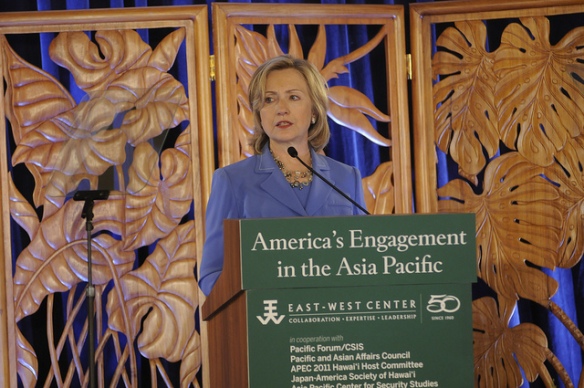 Secretary Clinton delivering speech on America's Engagement in the Asia-Pacific.

Speaking on October 28th, 2010 at the start of an extensive tour of Asia and the Pacific, U.S. Secretary of State Hillary Rodham Clinton said that the United States is working to sustain and strengthen its engagement in the region. “There are some who say that this long legacy of American leadership in the Asia-Pacific is coming to a close, that we are not here to stay,” Clinton said. “And I say look at our record. It tells a very different story.”

Clinton’s speech was hosted by the East-West Center in cooperation with Pacific Forum CSIS, the Pacific and Asian Affairs Council, the Japan-America Society of Hawaii, the Asia-Pacific Center for Security Studies, the APEC 2011 Hawai‘i Host Committee and the University of Hawai‘i.

END_OF_DOCUMENT_TOKEN_TO_BE_REPLACED

HONOLULU (Jan. 14) – In a policy speech delivered Tuesday at the East-West Center in Honolulu, Hawaii, Secretary of State Hillary Rodham Clinton outlined U.S. goals for multilateral engagement in the region. “America’s future is linked to the future of the Asia Pacific region, and the future of this region depends on America,” Clinton said.

The speech came at start of what had been scheduled to be Clinton’s fourth trip to the Asia Pacific region as America’s top diplomat. However, she later postponed the remainder of her trip and returned to Washington due to the devastating earthquake in Haiti.

Clinton spoke at the East-West Center in observance of the 50th anniversary year since the Center was founded by Congress to promote better understanding and relations between the peoples and nations of the U.S., Asia and the Pacific.

END_OF_DOCUMENT_TOKEN_TO_BE_REPLACED

HONOLULU (Jan. 10) — On Tuesday, Jan. 12, Secretary of State Hillary Rodham Clinton will deliver a major policy address on the U.S. vision for Asia-Pacific multilateral engagement at the East-West Center in Honolulu, Hawaii. Although attendance is by invitation only, the speech will be streamed live online at EastWestCenter.org at 2 p.m. Hawaii Standard Time.

Secretary Clinton’s address comes at the start of an eight-day Pacific trip that, in addition to Hawaii, will take her to Papua New Guinea, New Zealand and Australia.

The State Department has said that the East-West Center was chosen as the venue for Secretary Clinton’s policy address in commemoration of the 50th anniversary year of the Center’s founding by Congress to strengthen relations and understanding among the peoples and nations of Asia, the Pacific, and the United States. 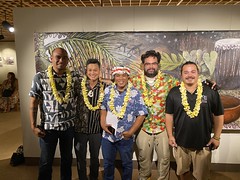 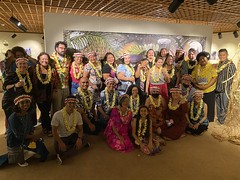