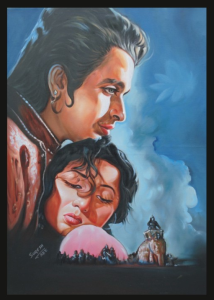 The EWCA Islamabad Chapter (EWCA-IC) will celebrate on May 14th, 2010 the  East-West Center Day in Islamabad, Pakistan with an exhibition of 30 paintings from local cinema billboard painters. These billboard painters were supported through Rs. 40,000 seed money for this exhibition through the left over funds of Community Service Project (CSP) of the EWCA-IC.

Cinema billboards, with their dazzling images were a part of the popular culture of major cities in Pakistan. Their enormous scale, bright color and melodramatic imagery was used to excite the public. The visual power of these illusionist billboards was integral in building the public’s fascination with film starts for nearly five decades. However nowadays, with the demolishing of cinema houses and the replacement of hand painted billboards by panaflex, the cinema billboard painters are struggling financially.

END_OF_DOCUMENT_TOKEN_TO_BE_REPLACED

The Chennai Chapter of the EWCA celebrated EWC Day on May 28, 2009 at the Madras Boat Club, with a ‘Talk’ on “Indo-US Relations Today” by the Chief Guest, Mr. Fred Kaplan, Consul for Public Affairs, US Consulate General, Chennai. It was a ‘hat-trick’ event. We were fortunate to have him participate in our EWC Day celebrations for three years consecutive years! The alumni attended in good strength and distinguished invitees were equally thrilled to be there on this happy occasion. The ‘Talk’ was followed by Fellowship and dinner.

END_OF_DOCUMENT_TOKEN_TO_BE_REPLACED

East-West Center Day was celebrated on the 16th of May 2009 at Dolphin Restaurant, Myepadaytha Kyun. It was attended by the following alumni:

We are happy to welcome a new member, Tim McInerny, who did the Asia Pacific Leadership Program in 2007, and brings fresh energy to our group.

The East West Center Day (14th May) was celebrated in Dhaka, Bangladesh by the EWCA Bangladesh Chapter on Thursday, the 14th May 2009.

The Chapter organized the EWC Alumni Evening which was attended by a number of EWCA alumni in Bangladesh. The activities included the following.

The Chandigarh Chapter of East-West Center Association celebrated the East-West Center Day on 14 May 2009 and organised an informal get together over dinner. Six out of the current eight members attended the dinner.

During the dinner meeting, the chapter members discussed various activities that the Chandigarh Chapter can undertake at its level keeping in view the charter of the EWC.

The chapter members also expressed serious concern over the deteriorating political situation in South Asia, especially Pakistan, Nepal, and Sri Lanka that has a large number of alumni from the EWC.

It was further discussed that due to the prevailing political condition in Pakistan, it may not be immediately feasible to have a collaborative effort with Pakistan Lahore Chapter. It was earlier decided that since the chapter is very small, we should collaborate with alumni in neighbouring regions to enhance the EWC mandate. The members felt that the attempts for a collaborative effort should be revived as soon as things improve in Pakistan.

Further, it was decided that the Hawaii Conference should be used as an opportunity to meet with other chapter leaders in neighbouring regions to start a group that keeps in touch and involves in collaborative effort to further enhance the activities mutually beneficial to all.

It was reiterated that since Chandigarh is one of the very active chapters, despite being a small group (only 8), the EWC should be requested to facilitate participation of more than one chapter leader at the Hawaii Conference. This will only be possible with some financial support from the EWC.

Further, the members thought it prudent to ask the EWC of providing it with a list of alumni of the EWC in the region, along with their contact details, so that the group could be expanded to expand the scope of the chapter.

The EWCA Shanghai Chapter met at a restaurant in Shanghai on May 14 to celebrate the 49th anniversary of the founding of the EWC.

The occasion was used by the chapter to visit the “Balbhojan” with food for children, an education program, and to distribute educational kits to about 60 underprivileged and street children. We also visited and helped serve them lunch provided by “Balbhojan.” It was a memorable visit.

The East-West Center Alumni Association, Chennai Chapter celebrated its Annual Day on May 28, 2008 at the Strokeside Hall of the Madras Boat Club (founded in 1886).

The Chief guest, Mr. Frederick J. Kaplan, Consul, Public Affairs, American Consulate General in Chennai, delivered a talk on “Indo-US Relations: Past, Present and Future.” Professor Dr. Gopalji Malviya, Head of the Department Defence and Strategic Studies University, presided. Interestingly, Mr. Fred Kaplan was the Chief Guest last year at the same venue. It was sort of a review of Indo-US relations during the twelve-month period that had elapsed. END_OF_DOCUMENT_TOKEN_TO_BE_REPLACED

On Sunday 18 May, the Brisbane chapter celebrated EWC Day with a picnic next to the Nepalese pavilion in South Bank, which was built for the EXPO 88. The place was chosen because we were inaugurating our sister chapter relationship with the Kathmandu Chapter in Nepal. We chose that chapter for this initiative because we have a local member who was born there, Bhishna Bajracharya.

At the picnic and chapter meeting were Bhishna Bajracharya and his wife Edilyn; Karen and Peter Nunan; Iraphne and Ralph Childs; and Pat Byrne, Aline and Jeremy Webb, chapter President.

We plan to exchange brief biographical details with the Nepalese (Kathmandu) chapter, to help us decide what we will do next in this relationship. A meeting in a Nepalese restaurant is planned for late June to discuss our options. 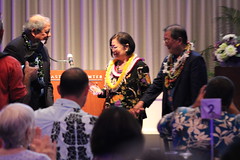 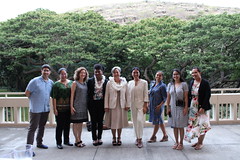 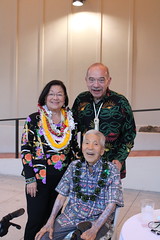