Submitted by Jessica A. Sheetz-Nguyen
Twenty-two chapter reports were received for this quarter’s report.

Highlights include the following:

There is a great buzz regarding the 2016 EWCA International Meeting in Manila! Nine chapters reported they were sending representatives. There may be more, but this is the count received in the reports. These include the APLP, ASDP, several members from the Bangladesh Chapter, others include Faisalabad, Korea, Mumbai, New York, Okinawa, and Singapore.

The APLP Chapter relaunched the APLP Navigator, an online publication chronicling events relevant to the APLP community.  Launched the first ever global happy hour that was a huge success with representation on 5 continents and 15 cities. Approximately 90 APLP alumni, staff, participants, and friends joined in gatherings worldwide on the evening of September 8.

Jessica Sheetz-Nguyen and Dona Cady of the ASDP Chapter are working feverishly to advertise and coordinate the upcoming 25th ASDP National Conference, which will be held in Washington, D.C. at the Fairfax Hotel on Embassy Row.

Several alumni from the Bangladesh Chapter are expected to attend the 2016 International Conference. They have also been planning a number of small community development projects with particular attention to the poor section of the community for their livelihood improvements through providing support to income generating and activities for creating opportunities for self-employment.

The Beijing Chapter is newly reformed under the leadership of Chapter Communication Liaison, “Sherie” Yue Cui.  She started a chat group which currently has 62 members.

Bhishna Bajracharya reported on his trip to the earthquake zone in Nepal for the Brisbane Chapter. He sent great photos of his mission, which was to provide children with earthquake head gear for protection!

The Faisalabad Chapter reported on their promotion of kitchen gardening in their community.

The Hawaii Chapter has been quite active, welcoming over 175 East West Center students and alumni at their annual picnic in Kapiolani Park. They also held a sale of kitchen items for students who were outfitting their apartments in Honolulu. In addition, the Hawaii Chapter in conjunction with the EWC Alumni Office provides a network of support for EWC participants with a mentoring program, which allows EWC participants to get first-hand experience of the everyday work environment and work culture from their mentor.

The Islamabad Chapter held a reception at Gallery 6, Follow the hyperlink for more information, Gallery 6. Seventeen journalists from 12 countries attended. These journalists were participants of the Senior Journalists Seminar 2015 sponsored by EWC and were from Afghanistan, China, Egypt, India, Iran, Iraq, Kuwait, Malaysia, Palestine, Pakistan, Philippines.  The hyperlink shows the wide variety of extremely interesting artwork presented at the exhibition.

The Korea Chapter is anxious to propose hosting the 2018 EWCA International Conference in Seoul, South Korea.  They will be publishing a book on “Memoirs of EWC Alumni of Korea.”  It will be about the introduction of EWC and experiences of EWC grantees of Korea in Hawaii and, or the impacts of the grant on one’s life.

The Lao Chapter imported 25 rainbow shower trees from Hue, Vietnam; the trees originated in Honolulu. These are planted and thriving in Vientiane.

The Malaysia Chapter is planning for its annual dinner at which it will hear a presentation from seismology experts.

The Mumbai Chapter celebrates the 25th year of its New Generation Seminar in conjunction with the EWC, where participants focused on the challenges and regional power dynamics in a program titled “Rising India.”

The Myanmar Chapter held a luncheon to honor Dr. U Than Oo who recently received an honorary degree from the University of Hawaii.

The Nepal Chapter celebrated East-West Center Day in late August, inviting dignitaries from the Fulbright Commission, the US Embassy, and Humphrey and Fulbright alumni. Dr. Bhishna Bajracharya, from the Brisbane Chapter, presented on Post Earthquake Rebuilding in Nepal.

The New York Chapter attended the US-China Relations lecture, that focused on the 275,000 Chinese students studying in the US. Steve Orlins presented the lecture at the Evergreen, a Shanghainese Restaurant in NYC.

From the Northern California Chapter, we heard that Barbara Stumph is active in publishing and outreach to CA teachers, where she presented a lecture on classical Chinese poetry and philosophy.

The Okinawa Chapter visited the fabulous Okinawa Institute of Science and Technology and with former governors of Okinawa.

The Tokyo Chapter sent off a new grantee to the East-West Center and celebrated this occasion with Noreen Tanouye and Karen Knudsen.

APLP alumni in the Washington, D.C. Chapter gathered for the first ever APLP Global Happy Hour.

And finally, the Southern California Chapter urged everyone to contribute to the Wall of Honor when we meet in Manila. 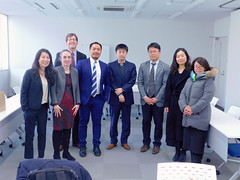 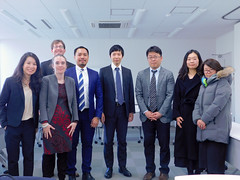 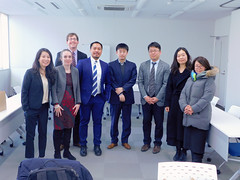