At the University of Hawaii’s recent spring commencement ceremonies, early EWC alumnus U Than Oo (ISI 1962-63) was awarded an Honorary Doctorate of Humane Letters for his pioneering education and literacy work in Myanmar. Now 88, he journeyed from Myanmar to Hawaii especially for the ceremony, where he was formally recognized for “the instrumental role he played in bringing about overall educational gains to the people of his country.” 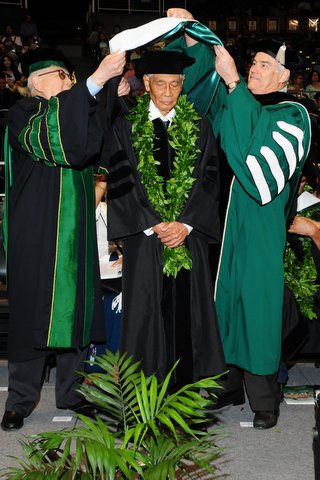 “I am proud and delighted to receive this great honor and truly pleased to be at the University of Hawaii, which I regard as my alma mater, once again,” U Than Oo wrote in prepared words of thanks. “Vivid in my memory till today,” he wrote, were his days at the East-West Center while he pursued his master’s degree in education.

“To have this prestigious highest award is not my individual struggle or achievement, but the invaluable intellectual and professional contribution of my colleagues, in the form of their selfless motivation. … I sincerely wish to say that this award belongs to each and every one at the Myanmar Department of Education.”

About U Than Oo
U Than Oo’s remarkable journey as an education leader in Myanmar is a story of determined triumph. For much of his professional life he worked under challenging circumstances made more difficult as his country was virtually cut off from the outside world for nearly 50 years. Over the course of his professional career and despite a highly political environment, he made substantial contributions and saw educational gains by applying the professional training that he had received as an East-West Center scholar at the University of Hawaii’s College of Education.

U Than Oo was born in the village of Chaung-nar-dan about 170 miles north of Yangon. His family was poor but he showed promise and an uncle offered to pay for his schooling at a grants-in-aide government school in the town of Pyay, not far from his village. He overcame a number of personal hardships at a young age, including a mother who suffered from mental illness and the early, untimely death of his father and older brother. He had just passed his Grade Seven promotion when the Japanese invasion in 1942 resulted in the shut-down of the all of the schools in the country – a shut-down that lasted for three years. Following the war, U Than Oo again renewed his pursuit of an education. With the consent of his family, parcels of their paddy-land was sold to finance his schooling at Yangon University. 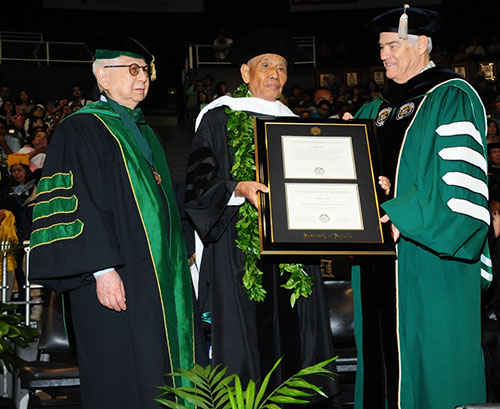 After receiving his two-year B.A. in education, U Than Oo worked as a headmaster at a local school and also pursued a higher degree, a B.Ed. Shortly thereafter, he successfully applied for a scholarship from the newly established East-West Center and in 1962 he arrived in Honolulu to attend the University of Hawaii on an EWC scholarship. He received his M.Ed. from UH in 1963.

Upon returning to Burma, he began his remarkable career. He was immediately appointed Assistant Administration Officer of Schools in the Directorate of Education and four months later was appointed Principal of the Pathein Teacher Training school. In 1965, he was named Assistant Education Research Officer at the newly established Burma Education Research Bureau under the Ministry of Education. The Bureau soon became a separate department within the government. While at the Research Bureau U Than Oo focused on the field of language and the Literacy Movement in Burma. His work had a profound effect on how language was taught in Burma. Despite challenges, the 1964 to 1988 Mass Literacy Movement achieved a 78.6% literacy rate throughout the country.

While still being involved with the Mass Literacy Movement, U Than Oo continued to be promoted and in 1977 he was named Director General of the Department of Basic Education in the Ministry of Education where he eventually became an influential Advisor to the Ministry of Education. In later years he also served as the head of the Myanmar Academy of Arts and Science within the Ministry of Education. Today U Than Oo is still held in high regard and people from all over continue to seek his advice and counsel on education matters. In late 2013, he was awarded an Honorary Doctorate of Letters by the University of Yangon in recognition of his professional accomplishments and dedication, and in May 2015 he received an Honorary Doctorate of Humane Letters from the University of Hawaii.

About the East-West Center and Myanmar
The East-West Center promotes better relations and understanding among the people and nations of the United States, Asia, and the Pacific through cooperative study, research, and dialogue. Established by the U.S. Congress in 1960, the Center serves as a resource for information and analysis on critical issues of common concern, bringing people together to exchange views, build expertise, and develop policy options. EWC is headquartered in Honolulu, Hawaii, with an office in Washington, D.C.

Since the Center was established, more than 350 Myanmar scholars, university students, journalists, teachers, public officials and other professionals have to participated in the Center’s programs, along with more than 62,000 other EWC alumni worldwide. Among the programs the Center has conducted in Myanmar was a groundbreaking international media conference in Yangon in March 2014 and a series of Myanmar Futures Exchange strategic forecasting workshops across the country.