The East-West Center’s Board of Governors has elected two new international members: Indian business leader Ratan N. Tata, who is returning to the board after serving several terms between 1993 and 2004, and first-time EWC board member Takeshi Niinami, CEO of Japan’s Lawson, Inc. 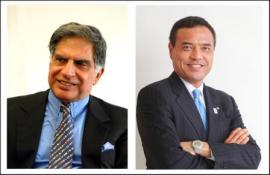 EWC Board of Governors Chairman Brian Tsujimura and the other board members, along with Center President Charles E. Morrison, extended a warm welcome to the new members, who were elected to three-year terms, and expressed their sincere gratitude to outgoing member Tarun Das.

About the Board appointees:

Ratan N. Tata headed the Indian industrial powerhouse the Tata Group until his retirement in 2012, and retains the title of Chairman Emeritus. He chairs two of the largest private-sector philanthropic trusts in India and is a member of the Indian Prime Minister’s Council on Trade and Industry. He also serves on the board of trustees of Cornell University and the University of Southern California, as well as the board of directors of Alcoa, among numerous other board positions. He received a Bachelor’s degree in architecture from Cornell in 1962 and worked briefly in Los Angeles before returning to India. The Government of India honored Mr. Tata with its second-highest civilian award, the Padma Vibhushan, in 2008. He has also received honorary doctorates from several universities in India and overseas.

Takeshi Niinami is Chief Executive Officer and Representative Director of Lawson, Inc., a major convenience store chain operator with more than 11,000 store outlets in Japan, and over 460 stores in China, Indonesia, Thailand and the U.S. In 1981, he started his career as a professional in sugar trading at Mitsubishi Corporation. In 1995, he founded and served as the CEO of Sodex Corporation (currently LEOC Co., Ltd.), a hospital food service joint venture between Mitsubishi and Sodexho in France. He became President and CEO of Lawson in 2000, after Mitsubishi acquired the company. Mr. Niinami serves on the Industrial Competitiveness Council of Japan as an economic advisor to Prime Minister Abe, and he is also a member of the government’s Tax Commission. He is Vice Chairman of the Japan Association of Corporate Executives and helped support Tokyo’s successful bid to host the 2020 Summer Olympic Games. Mr. Niinami is a graduate of the Harvard Business School.