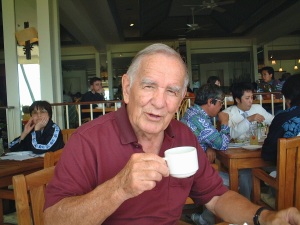 Father Dever performed marriage ceremonies for many EWC students and holds a very special place in their hearts.  Jerry and Tsue Ostermann write:

A Newman Center Chaplain in the 60’s, he was a warm, caring adviser and friend to many EWC students.  He was always there if you needed help.  We needed help when, after vacating our apartment, we learned that Jerry’s draft board would not allow him to leave the US for degree-related field study.  Father Dever found a room for us in a dormitory at St. Francis Hospital where we lived free-of charge for 11 months.  Father married many EWC couples.  In our case, he married us at St. Pius X in Manoa in 1967, and years later, Father Dever married both our sons and their wives in the islands.  Known for his humor, storytelling and selflessness, Father Dever was a fun person to be around.  We always made a point of seeing Father whenever we visited Hawaii during the last forty some years.   We are now re-reading some of the messages he sent us, usually very brief but precious in thought and content.  We shall miss Father greatly now that he has left us, and our next trip to Hawaii will just not be the same without seeing the twinkle in Father’s eyes and hearing his latest jokes.  In celebrating 50 years of priesthood in 2002, Father wrote, “If given the opportunity, I would do it again.”  For us, and for so many more in Hawaii and beyond, we are thankful that Father chose the priesthood the first time and are confident that his second opportunity is now unfolding before him.

For more information about Father Dever go to the Hawaii Catholic Herald website at http://www.hawaiicatholicherald.org/Home/tabid/256/newsid884/3897/Default.aspx.