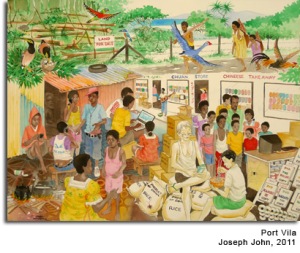 This is the first exhibition devoted to Vanuatu’s urban culture. The exhibition is divided into sections, each of which touches on a key zone of urban experience: the marketplace, the home, the urban nakamal or kava bar, Bislama (Vanuatu’s creole) and contemporary art. Working with friends and colleagues from different parts of Port Vila, the curators collected everyday objects, archival images, documentary film and contemporary art. A group of Port Vila youth, part of the Wan Smol Bag Youth Photography Project took their cameras to the streets to document their lives. Six Vanuatu contemporary artists were commissioned to create work for the exhibition, specifically engaging with their urban experience, and providing commentary on life in town.

Listen to this audio piece at  Pacific Islands Report.