Mahalo to all the chapters that responded to the call for quarterly reports. We received twelve reports from our chapters.

Mahalo also to those chapters that shared their views on the issue pertaining to 1) a cooperative Student Fundraising Permanent Endowment Fund Project for 2011 with all the chapters collectively participating and 2) to the Chapter proposal raised earlier that Chapter Reports be changed from the current quarterly to a twice a year reporting.

The following Chapter Leaders reported on their chapter activities:

The Chapter Reports are as follows:

On the road with limited communications, Co-Chair Pennings reports from Amsterdam that over the past few months, their group had two dinner activities. One was attended by sixteen EWCA members and had Vanessa Zhang, a Chinese Economist as their Guest Speaker, and the other dinner event had twelve EWCA members with Charles Morrison, EWC President as Guest Speaker.

On the response to the 2 proposals: the chapter has not discussed the chapter fundraising proposal and sees the 2x per year reporting as desirable.

The Chapter is pleased to report the establishment of 1) their Leadership Board consisting of one Representative elected by each APLP alumni cohort. Whereas Representatives are responsible for communicating with their own cohort, the Leadership Board oversees chapter management and ensures effective communication with alumni members. Elected are five leadership positions, five at large representatives and three committees (EWCA liaison, Admissions & Recruitment, The Navigator Newsletter. (Contact the Alumni office for specific names). 2) The Chapter is announcing the 10 Year Anniversary of APLP. In nine cities around the region, alumni meeting events are organized to network and celebrate APLP’s 10 year milestone.

On the response to the 2 proposals: the chapter will encourage anniversary meetings of attending alumni to donate to the EWC Scholarship Fund and supports the status quo of chapter quarterly reporting.

No new activities to report for this quarter. Michelle Marion representing the Arizona Chapter and a member alumnus of the ASDP Chapter is also working with the EWC Endowment Fund Group. She will be sharing the goals of the latter group with the Arizona chapter and via the list serve and quarterly newsletter, to the ASDP chapter.

On the response to the 2 proposals: both the Arizona chapter and ASDP will be discussing the fundraising endowment issue with Michelle and supports the 2x per year chapter reporting as it provides more time for EWCA related activities among academics busy with job and classroom concerns.

The report from our Brisbane chapter is organized in two areas: Chapter events & activities and Community service projects. On the events and activities area: 1) Jeremy Webb is continuing to actively inform members of climate change issues via the climate change network created in the lead up to the July EWCA/EWC Anniversary Conference in 2010. Enthusiasm for the proposed climate change regional conference has mellowed, especially after all the Chapter energy invested in the unsuccessful Brisbane 2012 Conference bid. 2) On April 3rd, Chapter members had a pot luck supper where the Chapter website was announced as operational, plans for 2011 were discussed and letters from the Chapter’s Nepalese sponsored students were shared. 3) Member Tim McInerny had a New Zealand APLP participant interning with him at the Australian Red Cross Queensland flood relief operations. The intern’s work later led to a related New Zealand job for the intern in Bereavement Funding. On the Community Service Projects: 1) The Chapter continues to support two economically challenged students in Nepal and is planning a fund-raising dinner at a Nepalese restaurant for them in July. 2) Four members were involved in Australian Red Cross Disaster relief during the Queensland flooding. Activities ranged from running evacuation and recovery centers, outreach to flood victims, removing flood debris, etc.

They have been interviewed by journalism students to encourage more people to commit to volunteerism.. 3) The Chapter thanks Noreen Tanouye for providing them with contact information on their new members: Harry Bhaskara and Bruce Allender (Melbourne) and Taka Tsuchiya (Sydney) the latter two, affiliate members who do not pay any dues.

On the response to the 2 proposals: Chapter members are encouraged to contribute individually and supports the 2x per year chapter reporting.

1) The Chapter’s warmth and hospitality welcomed Ms. Ni Ni Win, EWC awardee who worked with institutions in the State of Tamilnadu on HIV/Aids Control. Chapter President M. Belliappa and Chapter Vice-President P. Subraminayam guided her during her entire stay and provided her with an overview of the program and issues involved in HIV/Aids control and treatment. 2) It is with great honor and pride that the Chapter announced the bestowal to their Chapter President , M. Belliappa, the Award of “Member of the Most Excellent Order of the British Empire (MBE)” in recognition of his services to environmental protection and the promotion of alumni relations. The award was from Her Majesty the Queen of England and was given by UK’s Deputy High Commissioner in Chennai. The Consul General of the US in Chennai attended the important occasion along with other guests. The Chapter plans to hold a Career Guidance Conference soon and will continue to jointly organize areas of mutual interest with the Association of British Scholars in Chennai.

The Chapter is happy to report the following sponsored events for this quarter. First, over 140 EWC alumni and students attended the Hawaii Chapter Annual Fundraising Event held at the Pacific Club on April 3, 2011. The central goal of the event, raising funds for EWC student travel awards, was successful, and five EWC student travels to professional conferences this summer will be realized. There were other social/networking goals achieved at this event: The event opened with a period of respectful silence for the earthquake and tsunami victims of Japan. Highlighted were meaningful speeches by EWC Pres. Morrison, EWC Board of Governors Chair Sananikone, and Executive Board Members Flanigan and Hefner. The dinner was enhanced by a spirited auction and art bazaar of Asian artifacts and collectibles. Second, the Chapter hosted an intimate cultural evening of Japanese music and food by visiting musicians from Japan who superbly performed Kouta, a Japanesse musical art form.

Third, the Chapter is planning to host an event in May 2011 to celebrate the annual birthday of the EWC.

Our Hyderabad Chapter is engaged in continuing the worthwhile community activities that they listed in the previous Chapter quarterly report.

1) The Chapter reports that approximately 30 members participate in Chapter activities. Since January of 2011, seven online Newsletters were distributed to the approximately 50 registered members. 2) They will be holding a Kansai Chapter General Meeting tentatively scheduled for May 28. To date, the actual program and venue has not been decided. A Chapter Board meeting will precede the General Meeting. 3) The Chapter will be involved in activities that will provide assistance to the affected earthquake and tsunami region. 4) Seiko Furuhashi (Chapter Pres.) and Kiyoshi Hamano (Chapter Vice-Pres.) will attend an informal gathering at a Hawaiian restaurant in Osaka of the UH Alumni Association in Kansai on April 16th.

On the response to the 2 proposals: The Chapter is interested in getting more detailed information on the collaborative EWC Chapter Alumni Permanent Endowment for Student Scholarships. The Chapter hopes to include this fundraising information in their Newsletter and will include the item at their scheduled General Meeting. The Kansai chapter supports the 2x per year chapter reporting.

Sends heartfelt compassion and speedy recovery to our fellow EWC alumni of Japan. The Laos-Vientiane Chapter is pleased to report the following:

Networking among EWC alumni in Laos is ongoing. Regular meetings of the Chapter have not occurred due to delays in securing a legal permit to form the EWCA Alumni Association in Laos. They are reaching out to the US Embassy in Laos and are hoping that the Embassy could be a venue for meetings. The Chapter reports that they sent to the EWC the name of EWC alumni Dr. Chamla to be the EWC Vientiane Representative in Vientiane. The Chapter progress is on a holding status to date.

Is happy to report that though the Chapter is still in a growing phase, EWC alumni came for the first time to a dim sum lunch in downtown Toronto earlier this April. Discussion at the luncheon ranged from new EWC online community to the future events that the Chapter may be involved in. The Chapter’s Goggle group is continuing to add new members.

On the response to the 2 proposals: The Chapter leader Jonathan Jacobs shared 2 information to the group: One the EWC budget crunch and the other, the Leaving a Legacy Brochure from the EWC Foundation office. At this time, individual alumni are expected to contribute funds. The Chapter supports the status quo (quarterly reporting).

No new activities to report for this quarter. We appreciate Aziz Husain’s efforts to contact fellow alumni Dr. Karim and his attempts at convening an EWC Chapter meeting this month. EWC Chapter alumni gathering together has been lackluster and difficult to organize at this time.

Is pleased to report the following activities: 1) On February 4, 2011, a fellowship dinner of EWCA Singapore Alumni followed after a return dance performance of EWC Hawaii alumnus Garrett Kam. This was held at the Philatelic Museum. 2) On February 8, 2011, EWC alumnus Garrett Kam had a dance performance at the National Institute of Education, Nanyang Playhouse attended by Chapter members and students from the Institute.. 3) On April 20, 2011, the EWCA Chapter alumni joined the Fulbright Association of Singapore at their annual dinner with US Ambassador to Singapore David Alderman as Guest Speaker.

On the response to the 2 proposals: The Chapter will try their best to rally donations for the EWC via chapter donations. The Chapter is okay with the quarterly reporting and feels that keeping the flow of communications moving among chapters and the EWC is more important.

Response results: On the Chapter Reports:

Definitely, the Fundraising Chapter Collective Permanent Endowment for Student Scholarships proposal needs further elaboration and the Chapter responses to this noteworthy vision sounds promising. Given further elaboration and explanation of the visionary goal and logistics involved with the Chapters, the Alumni Office and the EWC Foundation Group, hopefully, we can make this happen. 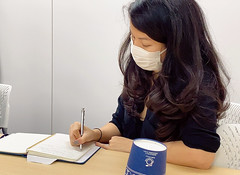