All part of the real-life tale of Thailand’s King Naresuan, who sat on the Thai throne more than 400 years ago when adventurous Japanese traders and samurai first settled in Thailand. And, you can read all about it in English thanks to Kennon “Ken” Breazeale, a projects coordinator at the Center. Here’s the story:

Those key events in Thailand’s history were remembered recently when Crown Princess Maha Chakri Sirindhorn traveled to Ayutthaya, the old capital of the Kingdom where she opened a new section of the national historical park there. The Princess, many remember, was just at the Center in Honolulu where she rededicated the Thai Sala and accepted Center’s Asia Pacific Community Building Award on behalf of her father, His Majesty King Bhumibol Adulyadej.

The new section of the park, known as Nihonmachi, is the site where Japanese traders and samurai settled around the beginning of the Tokugawa Shogunate. To mark the occasion, the Toyota Thailand Foundation published a book on the period, written by Thailand’s best-known historian, Prince Damrong, who is a great-uncle to the present King. An English-language edition of his work, titled A Biography of King Naresuan the Great has just been translated by Breazeale, a projects coordinator at the Center. To complement the book, the Textbooks Foundation of Thailand has just published another book, written by Breazeale, titled The Writings of Prince Damrong Rajanubhab: A Chronology with Annotations.

Both books were presented to the Princess during the dedication of Nihonmachi.

7 thoughts on “Tales of old Thailand and Japan” 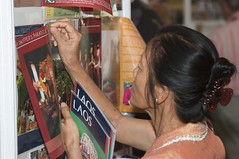